Fresh off of being presented with a sixth consecutive Excellence in Community Service Award from the Honeywell Security Group, Security ONE continues giving back to the community with a Christmas surprise.

Ontario Provincial Police responded to a call on Wigle St in Leamington back in June of 2018 to find 36- year old Haifa Gebrail with serious injuries after being assaulted in her home. A 44-year old man was arrested at the time and charged with attempted murder.

“We just want her to go back to living a normal life,” says Sam Sleiman, of Leamington. Earlier this year, his niece, Haifa Gebrail, also of Leamington was brutally attacked and left for dead. “Haifa is a survivor, a thriver, and a fighter”, he said.

Gebrail has spent the last six months recovering in hospital and has been released and is now living on her own again. “She suffers from Post Traumatic Stress Syndrome and sometimes has trouble sleeping,” Sleiman said.

In September of 2018, Security ONE Alarm Systems launched their 5th annual “Who Deserves To Win” contest and received over 200 nominations over two months. Haifa Gebrail was the overwhelming winner. 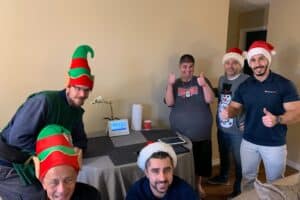 Sales & Loyalty Manager, Corey Robertson says this year’s winner was something special. “What happened to Haifa is every person’s worst nightmare. It’s the kind of crime you only see on TV or in the movies”, he said. “We’ve seen the Leamington community rally around Haifa, and we couldn’t be prouder to help give her and her family the peace of mind, and protection, they deserve.”

A short video of the big day, including the installation and candid interviews with the family, can be seen on Security ONE’s YouTube channel.

In addition to arming doors and windows, Robertson says there one more critical piece to Gebrail’s security system. “We’ve outfitted Haifa with Personal Emergency Response Button with GPS and 2-way voice communication that will work anywhere in North America”, says Robertson. “She’ll be able to take this device with her anywhere she goes, knowing that help is only the push of a button away.”

Christmas for the Gebrail family will be a lot more peaceful this year. “Old Haifa passed away”, a beaming Gebrail announced, “New Haifa is here to stay. I’m so thankful to this community and to Security ONE.”