At Security ONE, we are involved in community service all year long. But there is just something about the holiday season that really makes you want to give back. This year, there have been a fair amount of high profile home invasions in our area, so we invited the public to nominate deserving families to receive a free Honeywell security system that would be delivered in time for the holidays.

The public support for the idea was overwhelming. We launched the campaign in September at our inaugural customer appreciation parking lot BBQ. With a heavy social media campaign on Facebook, Twitter, LinkedIn and Google+, a targeted email campaign, and traditional advertising on local radio, we narrowed down the nominations to six finalists and received hundreds of votes. We couldn’t be happier for the Wall family who received the Honeywell system as well as our CSAA 5 Diamond Certified monitoring and Honeywell Total Connect Remote Services. 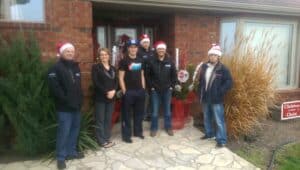 A Deserving Family
Unfortunately, the Walls were victims to four burglaries in their home. They run a home daycare business and were nominated by Charles LeBlanc who explained how dedicated Lisa Wall is when taking care of his children and he wanted to give her security in return.

We created a video on the installation day that features some of Santa’s helpers from the Security ONE team as well as interviews with Charles and the Wall family. We are now in the press release phase of the campaign and are linking the video from our You Tube channel to all other social media platforms. Take a few minutes to watch the video above. My thanks to the Security ONE volunteers who gave of their time on a weekend to shoot the video, install the equipment and wrap all the Honeywell presents!

Christmas should be a time of joy and I feel very fortunate that we were able to give the Wall family peace of mind this holiday season.