This story comes from ABC news in Fresno, CA…
Accidentally butt dialing someone is embarrassing or inconsequential to most, but for two Fresno, Calif., men, their cell phone mishap landed them in jail.

The call, which went to 911, started like any other call to the police dispatcher, with the operator asking, “What is your emergency?” 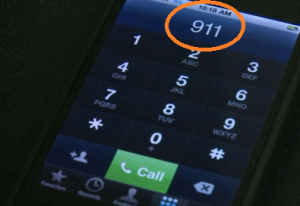 But when no one answered, the operator didn’t hang up, instead staying on the line and listening to the pair, who police identified as Nathan Teklemariam and Carson Rinehart, both 20, as they talked about wanting to do drugs. It wasn’t long before the conversation turned to breaking into a car.

“Get the bolt and give me the hammer just in case,” one of the two voices on the phone said.

Shortly after that statement, the dispatcher heard a window shatter and the people on the phone started yelling that they found prescription drugs.

As the two were driving away, police were already in the area searching for the men based on clues that the 911 dispatcher was feeding to them.

The police finally tracked the suspects down and pulled them over. The suspects acted confused and questioned what why they were being pulled over, police said.

“Oh, he’s following me, dog,” one of the suspects said in the recording. “Wow, what the [expletive] did I do?”

As they were being questioned, the suspects allegedly denied any wrongdoing, but after searching the car, police said they found items that allegedly were taken from the burglarized vehicle.

After being cuffed, the suspects were finally told how they were caught.

Damn indeed. That’ll land you in the Dumb Criminals Hall of Fame!